Second Edition, with a New Afterword,
Published in 2017 by the University Press of Mississippi 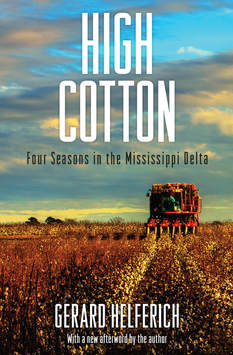 In this evocative, dirt-under-the-fingernails portrait of a year in the life of a present-day cotton farmer, Gerard Helferich captures the hope and heartache that collide under the scorching sun of the Mississippi Delta.  High Cotton follows small-time farmer Zack Killebrew through the annual cycle of planting, laying by, and picking, as he struggles to defend his crop from perennial menaces such as insets and drought, and against the 21st-century threat of globalization.

In the course of his tumultuous year, Zack teeters between the promise of a six-figure payoff and the threat of financial ruin.  Then, as the harvest nears and the delicate cotton is at its most vulnerable, two hurricanes named Katrina and Rita come ashore on the Gulf Coast and steam toward the Delta.

Interwoven with Zack’s narrative is the rich history of cotton, a crop dating back to ancient India, Egypt, and Mexico.  In America, cotton played a pivotal role, fostering the spread of slavery, fueling the tensions that led to the Civil War, and setting the pattern of race relations for the better part of two centuries.  Even today, the United States remains one of the world’s leading exporters of cotton, and the humble plant still shapes our literal and social landscape.

Combining an engaging personal narrative, a palpable sense of place, and a meticulous attention to process, High Cotton documents the farming life in the Mississippi Dela, “the South’s South,” with precision, honesty, and much affection.

“We come to care immensely about his fate.  As Mr. Helferich presents him, Zack Killebrew is an exceedingly likable man….Evocative.”    -- Wall Street Journal

“In the mode of John McPhee’s recent Uncommon Carriers,…High Cotton is a microcosmic look at work….A perceptive and unaffected look at an occupation that, however changed, is almost as ancient and venerated as human civilization.”
-- Business Week

It is, rather surprisingly, high drama….Helferich gives a vivid biography of cotton….[He shows] understated eloquence and a lyrical feel both for his legendary crop and the processes by which it is eventually brought to mill."    -- Times Literary Supplement

“Helferich provides valuable insights into the historical and cultural significance of cotton in the United States."    -- Publishers Weekly

“Helferich tells the story of a plant, a region, and a people as he recounts a year in the life of Mississippi Delta cotton farmer Zack Killebrew…Helferich will keep readers wondering whether Zack will be able to endure another year in the face of a separation from his wife, tornadoes and storms, and Hurricane Katrina. Recommended.”    -- Library Journal

"One year with a Mississippi cotton farmer reveals the harshness and fragility of life in the Delta….a generally genial portrait of a rugged man shaped and shoved by geography, weather, economics and race."    -- Kirkus

"Here is a clear-eyed writer offering a story that is personal, sympathetic and honest....The writing here sparkles without ever distracting readers from the real matter at hand... [The book is] an impressive array of history and science."  -- Jackson (MS) Clarion-Ledger

“A fascinating look at the crop that affected a nation.”    -- Atlanta Journal-Constitution

“In thoughtful, luminous prose, Helferich writes about a tough year in the life of small-time cotton farmer Zack Killebrew, with useful digressions into the history of farming in the Delta, the cultures of slavery and cotton, and the effects of globalization.”
-- Memphis Commercial Appeal

“Helferich does a fine job capturing the faith and determination it takes to weather the risky world of cotton framing….Cotton may seem a rather ‘dry’ subject, but in Helferich’s capable hands, it oozes with interest.”    -- Rocky Mountain News

“Readers will almost taste the salty sweat on the wrinkled brow of Zack Killebrew as he looks out over a field that will make the difference as to how well or how poorly he will live….A book of high drama….[Helferich’s] writing is direct and highly readable.”
-- The Oklahoman

“What I ended up with [in High Cotton] was very similar to what I remember from Kidder’s book [House].  Even more so, I was left with something akin to Willie Morris’ renowned work “The Courting of Marcus Dupree.”  Something like one of John Feinstein’s books about golf or “9 Innings: The Anatomy of a Baseball Game” by Daniel Okrent.”
​ -- Oxford (MS) Eagle

“High Cotton is an intriguing story of love for the land we sow, and the struggles that arise under the Delta’s blazing sun.”    -- Delta

“High Cotton is a fascinating portrait of Mississippi cotton farmer Zack Killebrew.  The book is a powerful reminder of William Faulkner’s statement that “In the South, the past is never dead.  It is not even past.”
-- William Ferris, University of North Carolina at Chapel Hill

“High Cotton is an evocative journey of one farmer’s travails from cottonseed to harvest.  The reader can smell the black dirt and blooming cotton, and will fret and celebrate with farmer Zack at his victories and defeats at the hand of the weather, the insects, and the U.S. government.  The book almost lilts with the rhythms of the Mississippi Delta.”
-- Pietra Rivoli, author of The Travels of a T-Shirt in the Global Economy

"Fascinating and masterful, High Cotton is a unique treasure trove of information about a long neglected and much misunderstood segment of American life.”
-- William F. Winter, former Governor of Mississippi

“An artful intertwining of biography, history, and reminiscence, this thoughtful and informative book tells the story of cotton from its broadest, most ancient perspective and from a very particular and modern one as well.  An intimate, richly textured view of an unfamiliar facet of the New South.”
-- JoAnne Prichard Morris, coauthor of Barefootin’: Life Lessons from the Road to Freedom

Prologue
“The Most Southern Place on Earth”

In the northwest corner of Mississippi, bounded on one side by the baroque coils of its namesake river and on the other by the equally tortuous Yazoo and Tallahatchie, lies the extraordinary diamond of land known simply as the Delta.  Beginning roughly at the Tennessee border, the region extends up to 70 miles across and nearly 200 miles end to end, from Memphis in the north to Vicksburg in the south.  Long a land of cultivated fields and muddy sloughs, antebellum mansions and sharecroppers’ shacks, courtly manners and the worst of human depravity, the Delta has frequently served as the emblem of an entire region, “the most southern place on earth.”

Graced (or cursed) with an overwhelming sense of place, the Delta has exerted an influence on the nation out of all proportion to its 7,000 square miles.  Its flatness and fertility alone would have ensured its uniqueness.  But as cradle of the blues and home to a multitude of writers, the Delta has stamped not just our culture but that of the world.  Even more significant has been the region’s long association with cotton.  Once the nation’s greatest producer of the fiber, today Mississippi is second only to the much larger state of Texas.  And 80 percent of Mississippi’s crop is still grown in the rich soil of the Delta, blanketing nearly a million acres and producing fiber valued at almost a billion dollars annually.  Though cotton has been raised for thousands of years, from India to Arizona, it is identified with no other region as strongly as here.

So central is the story of the plant to the story of the place, that it is impossible to tell one without telling the other.  Cotton is the starting point from which the rest of the Delta’s narrative flows—the reason the land was settled, the reason it was peopled with slaves, even why African Americans later fled to northern cities such as Chicago and Detroit.  The Delta was mostly wilderness in antebellum times, but it was in the area’s settled tracts that plantation agriculture, and the system of chattel slavery that supported it, attained its perfect, terrible expression.  And for a long century following Emancipation, it was in the Delta that white landowners battled most ferociously to maintain the prerogatives of an earlier, racially unambiguous era, as though the levees built to control the rivers could also hold back waves of social and political change.

Not only did cotton determine the history of the Delta and the South, it shaped the story of the nation.  In the antebellum era, the United States was the world’s greatest exporter of the fiber--and so it is today, claiming 40 percent of the world market.  It was cotton that paid the early Republic’s bills and cotton that fueled America’s first factories.  Without cotton, slavery would not have taken root so deeply in the South, loosing the economic and sectarian tensions that led to civil war.  Without cotton, in all likelihood there would have been no Republican Party, no Reconstruction, no battle to reclaim civil rights that had not been “self-evident” to the Founding Fathers.  Absent this single crop, the past two hundred years of American life would have been unimaginably different.  Today’s racial landscape would be unrecognizable as well, for the enduring rift between black and white is also part of the legacy of cotton.

Even more than the story of an exceptional plant and a singular region that have shaped the history of our country, this is a chronicle of the people who still risk everything to raise this ancient and essential crop.  Zack Killebrew is a small-time operator who, except for a youthful stint on Mississippi riverboats, has lived and farmed in the Delta all his life, as his parents and grandparents did before him.  For thirty years, Zack has struggled to raise cotton, sometimes with only his prodigious know-how and Rebel stubbornness to sustain him.  The enterprise has altered dramatically, and as we follow Zack through his annual cycle, from planting to harvest, we will see that the challenges he faces are very different from those of his forebears.  The perennial threat of rising water in the Delta has been all but eliminated by a historic flood-control initiative.  With a blizzard of farm programs, the federal government now assumes some of the risk inherent in growing cotton.  Sophisticated machinery and potent chemicals perform work once done by human hands.  Even the cotton plant itself has been genetically altered to resist insects and herbicides.  But perhaps more impressive than all these changes is how little cotton growing has altered in its fundamentals:  Government and technology have not eliminated the essential precariousness of the farmer’s life, which still hinges, as always, on the unreliable weather.

In addition, fierce new economic and political pressures now threaten to do what droughts and floods and weevils have not been able to accomplish, to drive small farmers like Zack off the land.  Every year has become a make-or-break season, and a single bad harvest could be enough to put him out of business--as it already has done many of his neighbors, who have run out of the requisite cash and will.  Every year, more than anything, Zack is fighting for the privilege of starting again the following spring.
​
But even if the Delta is due for a change of tenants, that doesn’t mean the immutable landscape will alter fundamentally.  Thunderstorms will still rumble across the yawning flatness.  Plants will still be sown each spring and harvested each fall.  There will still be a huge divide between the Delta’s rich and poor—perhaps even more so.  As I have witnessed over the course of three decades, the Delta is a place that abides change but slowly.  Even tomorrow, and next year, and the year after that, it will remain “the most southern place on earth.”  And all the while, its signature crop will continue to exert its influence not only the course of the region but the fortunes of the nation, as it has for the past two centuries.