Humboldt's Cosmos: Alexander von Humboldt and the Latin American Journey That Changed the Way We See the World 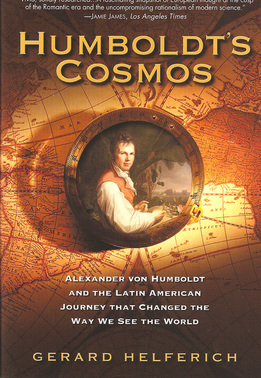 Alexander von Humboldt was the reigning scientific mind of the early 19th century, a unique combination of naturalist and adventurer.  With his companion Aimé Bonpland, Humboldt cut a 6,000-mile swath across the New World, through what is now Venezuela, Colombia, Ecuador, Peru, Mexico, and Cuba.

Risking his life in treacherous terrain, he conducted the first extensive scientific explorations of the Andes and the Amazon, literally redrawing the map of the Americas and dramatically expanding our knowledge of the natural world.  He brought back to Europe more than 60,000 plant specimens and a multitude of exotic New World animals, set an altitude record while climbing the volcano Chimborazo, made revolutionary discoveries regarding volcanoes and Earth’s magnetic field, and introduced millions of Americans and Europeans to the astonishing cultures of the Aztecs and the Incas.

At the completion of this epic journey, Humboldt became one of the most celebrated men in the world, feted by Thomas Jefferson in Washington and invited to Napoleon’s coronation in Paris.  His ideas revolutionized scientific research; laid the groundwork for entire new fields of study, such as climatology, oceanography, and several branches of geography; and his adventures and insights profoundly influenced followers such as Charles Darwin and Louis Agassiz.

Today, more places and geographical features are named after Humboldt than any other historical figure, and scientists continue to build on the foundations he established. A tale of rousing adventure and groundbreaking science, Humboldt’s Cosmos is a fascinating portrait of a brilliant mind and a bold spirit whose momentous journey of exploration greatly expanded the scope of his world—and ours.

Praise for Humboldt’s Cosmos:  Alexander von Humboldt and the Latin American Journey That Changed the Way We See the World

“Helferich has written a vivid, solidly researched biography…a fascinating snapshot of European thought at the cusp of the Romantic era and the uncompromising rationalism of modern science.  Helferich is a well-informed introducer of the book's many fields, from early theories about the formation of volcanoes to the history of the Spanish conquest, but his book succeeds best as a thrilling tale of adventure travel.”   -- Los Angeles Times

“On a five-year expedition that ended in 1804, adventurer Alexander von Humboldt became the first European to explore the Amazon basin, in the process cataloging thousands of plant species, gaining Europe’s first knowledge of the ancient Incas and climbing Chimborazo, a 20,600-foot volcano, needless to say, without oxygen tanks...His story is a great read.”    -- Gregg Easterbrook, The New Republic Online

“Helferich’s lush and engaging biographical adventure tale…successfully recreates the New World when it was still very novel to European eyes…Helferich’s eye for telling detail does justice to Humboldt’s own obsessive culling of observed particulars about the world around him, laying bare in the process many of the foundations of modern scientific method.”     -- Publishers Weekly

“Emerson once compared explorer and scientist Alexander von Humboldt to Julius Caesar, and certainly this Central and South American trek has all the drama of a power struggle in ancient Rome. . . .  Able retelling of an epic adventure the 20th century has all but forgotten.”    -- Kirkus Reviews

“Retracing the 1799-1804 odyssey of von Humboldt through South and Central America, Helferich synthesizes the many biographies written about the explorer into a concise appreciation of his personality and scientific significance….Helferich recounts the journey's risks, from piranhas to volcanoes, and his presentation is sure to satisfy reader curiosity about the explorer who had so many places named for him."     -- Booklist

“Alexander von Humboldt is surely one of the greatest but least remembered figures in scientific history.  This immensely readable book follows his adventurous journeys through Central and South America and its intellectual aftermath in the United States, Berlin, and Paris.  Helferich brings him wonderfully alive, whether testing electric eels in a jungle pool, counting bites from tropical insects, or discussing the alpine flora of Mount Chimborazo. Humboldt's Cosmos opens a fascinating window into the world of science and exploration two hundred years ago.”
-- Janet Browne, author of Charles Darwin: The Power of Place

"Gerard Helferich's Humboldt's Cosmos is as lively and eye-opening as the man himself.”    -- Orlando Sun-Sentinel

“Gerard Helferich’s lively portrait of the German naturalist and adventurer 200 years after his five-year, 6,000-mile exploration of South America should rekindle Alexander von Humboldt’s reputation in the 21st century.”    -- The Olympian